Hi Lynn!
Possum yarn is on my mind. I know you know about it since you've been here, but I think there might be a lot of knitters that don't. In a word, it's amazing, but since one word isn't quite enough, I'll go into a little more detail in this post. 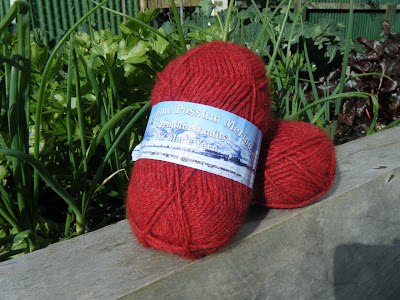 I picked up this lovely and gorgeously red yarn in Auckland when I was there last week. I am planning to knit your 'Antarktyda' hat pattern with this yarn for my mother-in-law, Ruth. She tried on the one I knitted for myself and absolutely loved it - and it looked cute as a button on her - so I told her one was going on the needles immediately.

First, just look at this yarn. Isn't it lovely? It is from a company called Supreme Possum Merino and it is 50% merino wool, 40% possum and 10% silk. It is an '8-ply' which is how New Zealand classifies it's wool weights, but to you and me, it's 'worsted.' This yarn is SO soft and the possum fur in it creates a fine halo similar to - but not quite as fuzzy - as angora.

The interesting thing about possum fur, is that it is hollow - like a polar bear - giving it exceptional insulative properties. Things made from it are warm and cozy and very soft and fluffy. It also resists pilling, which is one of my pet peeves about certain yarns such as angora.

I've had possum clothing and made things from possum yarn and used them in Antarctica when we were there, and it was the warmest, coziest stuff I've ever had.

So what about the poor possums, you might say? I know, I don't like the idea of killing things any more than you do, but the possums I am talking about are actually a pest in New Zealand. You can read more about it on this website here. They are non-native and were introduced 150 years ago from Australia (so they are not possums you find in the States that look like giant rats), but quickly spread and became a problem. They destroy areas of native forests in New Zealand and so have to be controlled. Using their fur for garments and yarn is one way to utilize this resource. If they have to kill the little guys, I'm glad that they can be used for something useful.

More about possums and the effect on the NZ environment here.

I just LOVE those socks you are making for yourself. I love that self-patterning yarn. I think it's interesting that you made two different heels to see which one you like the best. Do you think they will feel different and drive you nuts? That was my first thought, ha ha. Silly huh?

And spinning! I must admit, I'm envious. I'd love to be there, taking the class with you. I am so happy for you to be learning this new skill. I will get to it...someday!

The movie premier in Auckland for our film, Antarctica: A Year on Ice, was amazing. It's hard to describe how we are feeling; perhaps 'on Cloud 9' gets close. It's been fun being on the road with Antz and I've been knitting in the car as we travel along in New Zealand's beauty. Here's my latest hat, just finished yesterday. 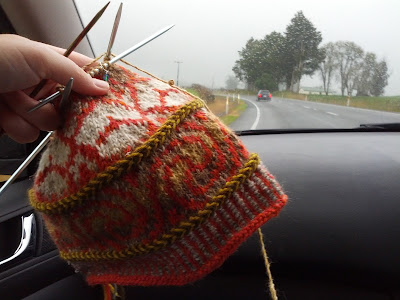 I used a celtic swirl design for the band and made up my own top design, which I may modify slightly.

It was raining really hard as we traveled down the west coast of the north island, but the sunset was spectacular. I love the silhouette of the flax plant. 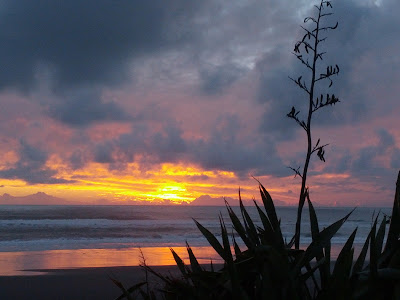 Well, the knitting needles are calling, so I'll sign off for now. Sending hugs, Christine
Posted by Unknown at 9:27 pm No comments:

How did your film opening turn out?  Hopefully, you are not feeling any earthquakes in Auckland, NZ to mess with your film festival. 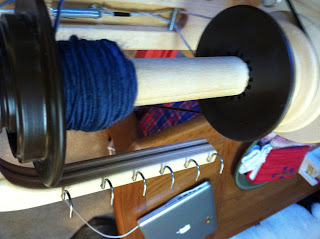 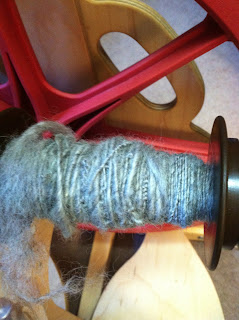 I forgot to tell you: I am taking spinning classes!  I met an incredibly talented woman at our local fiber arts guild and she is letting me rent one of her spinning wheels. She knits beautiful lace shawls and scarves with her own hand spun yarn. I have been practicing. The first attempt was not great (gray wool) but my second attempt (blue wool) is better. My next class, the 2nd of 4 instruction classes, is on Friday. I can't wait to get better at this. I see why people love spinning wool into yarn. It's amazing once you get the hang of it.
I'm also getting ready to close the second sock. Since these socks are for me, I decided to test the heels I like the most. As you can see, I've got two different heels on these socks. I will see which one is more comfortable. As you know, there are several ways to turn a heel (and close a toe for that matter) and I've always wanted to test how they feel but hardly ever make socks for myself. This is my chance.  Here goes... 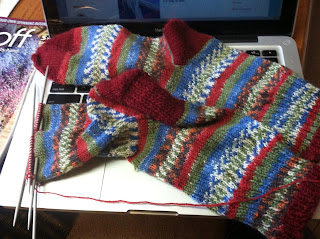 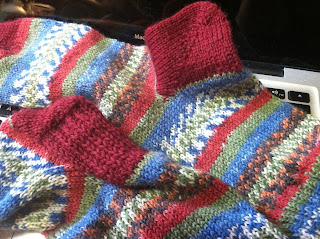 Hugs, Lynn
Posted by Unknown at 2:26 pm No comments: 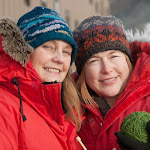